The Four-Dimensional Lord of Dance 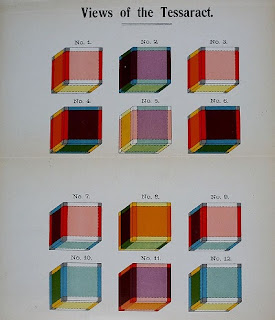 The focus was mathematical, but along the way I looked at how the fourth (spacial) dimension appears in the works of authors like H. P. Lovecraft, Robert Heinlein, H. G. Wells, Jorge Luis Borges, and, most memorably, Madeleine L'Engle, whose A Wrinkle in Time is about to appear as an uninspired-looking Disney movie in March (sigh). I also talked about mathematical visionaries and mystics like Paul S. Donchian and Charles Howard Hinton, both of whom made real contributions to the field, if only in the sense that they developed and humanized what the academics were saying in their inaccessible research articles, and both of whom might be labeled as cranks or crackpots.

Since then I've done a little research on Hinton, Donchian, et al., and have found a number of other links between the idea of a fourth spacial dimension and various forms of spirituality or mysticism. For instance, the German astronomer Friedrich Zöllner (1834 – 1882) apparently tried to use the fourth dimension explain Spiritualist phenomena. In his eagerness, he was imposed upon by the medium Henry Slade in experiments that have since been debunked. Fantasy and horror authors in their turn used the claims of Spiritualism in their stories; some, like Arthur Machen and Algernon Blackwood, actually subscribed to its views. Hinton, who wrote a number of "scientific romances" himself, was a post-Christian altruist who speculated that spiritual agencies might work by means of the fourth dimension and believed in something like eternal return.

Some Christians of the late Victorian era, disconcerted by the advance of materialism, attempted to colonize the fourth dimension themselves. For other Christians, such as the liberal theologian Edwin Abbott Abbott (author of Flatland: A Romance of Many Dimensions, a book much admired by Hinton), higher spacial dimensions were merely a metaphor for gradual way in which the human mind must approach divine truths.

Salvador Dalí appears to have used the fourth dimension in a similar way, in his famous 1954 painting Crucifixion (Corpus Hypercubus), which portrays Christ crucified on the net of a tesseract / hypercube / 8-cell (Schläfli symbol {4,3,3}) hovering over a square grid (Schläfli symbol {4,4}), illustrating the incomprehensibility of God to man.

I have in my hands a Dover edition of Speculations on the Fourth Dimension: Selected Writings of Charles H. Hinton, which includes several of Hinton's scientific romances. It's edited and has an excellent introduction by Rudolph v.B. Rucker, also known as Rudy Rucker, author of the Ware Tetralogy and a modern tribute to Flatland and all-around sci-fi author of note. So no doubt I'll soon be posting about all of this yet again. 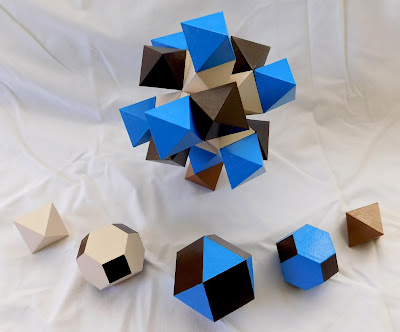 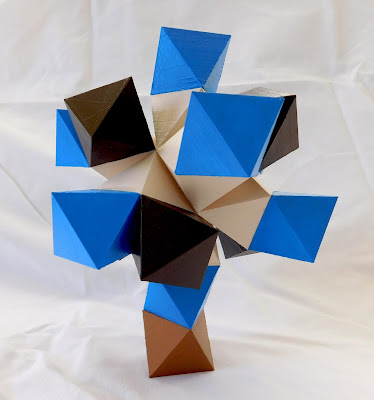 The net has the "south pole" at the center and the "north pole" at the base. For reasons fully known only to my subconscious, but partly inspired by Dalí's painting above, I decided to model it after traditional depictions of the Hindu god Shiva as Nataraja or Lord of Dance, with three-fold rotational symmetry. 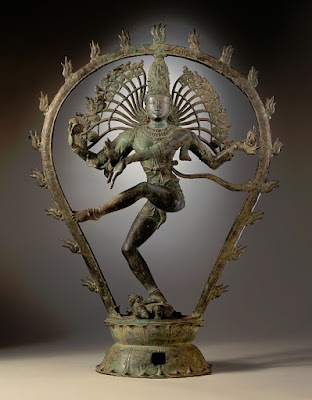 Shiva is the destroyer, and his dance is the cosmic dance of creation / destruction. That puts me in mind of the line from the Bhagavad Gita, uttered by Krishna, quoted by Robert Oppenheimer, and used by me in the title of a short story: "Now I am become Death, destroyer of worlds."
Posted by Raphael Ordoñez at 2:21:00 PM