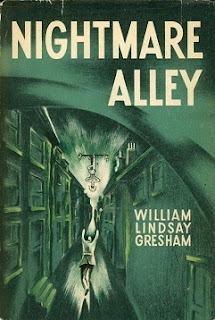 Question: What does William Lindsay Gresham, the American author of Nightmare Alley, a bitingly vitriolic, pessimistic, cynical novel about the rise and fall of a carnie conman, have in common with C. S. Lewis, the popular apologist and beloved writer of children's fantasy books?

Answer: They were both married to Joy Davidman.

I first learned of Nightmare Alley, which came out in 1946, when I watched the film noir of the same name starring Tyrone Power. After being rather difficult to find for a long time, it was available for streaming through Amazon for a brief period last fall, but has now mysteriously vanished again. It's an excellent film, a true gem among noirs. I must be getting worldly-wise, because I could tell exactly where the film was glossing over seedy details or pulling its punches. Most importantly, I could tell exactly how the story was supposed to end. I don't want to spoil it, but it's hard to think of a darker ending. 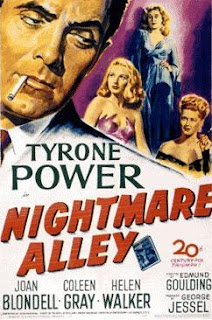 If the film is excellent, the novel is only that much better, a detached, merciless dissection of a man destroyed by his own small-mindedness and lack of self-understanding. Stanton Carlisle, the protagonist, uses what he learns at the carnival to start a big-time mentalist act, then reinvents himself as a spiritualist minister in a bid for money, lots of money. I don't think I'm giving anything away when I say that it all blows up in his face. He shows no mercy to marks and gets none when it's his turn to be the prey. The last line of the novel is so cold it burns.

And yet it's impossible not to pity Stan. There are several flashbacks to his childhood: you can't really look at a well-portrayed kid and say, yeah, he gets what's coming to him. As the pieces of his backstory fall into place, you see the picture of a child warped by selfish parents whose dysfunctional marriage pushes him into the adult world of fear, lies, compromise, manipulation, frustration, and abuse. The novel leans heavily (though not explicitly) on certain well-known Freudian theories, but its examination of Stan's psychology is no less incisive for all that.

Nightmare Alley is a grotesque but beautiful kaleidoscope of twisted humanity, in which the only freaks, inside the carnival or out, are those who aren't freaks. It's aptly named, because you can see the monstrous ending from far off in the very first pages, then proceed to step slowly toward it with the inevitability of a nightmare. Nightmare Alley is a masterpiece of noir.

A brief but detailed account of Gresham's life can be found here. He got to know the ins and outs of the carny world through a fellow volunteer in the Spanish Civil War. Shortly after the war his first marriage ended in divorce. He began drinking heavily and attempted suicide, after which he turned to writing and editing, marrying Davidman, his second wife, in 1942. They had two sons. His abiding interest in sideshows, spiritualism, magic acts, and debunking molded his literary career as a writer of both fiction and nonfiction.

In an account I can't seem to locate right now, I read that he and his wife both became interested in Christianity and the works of C. S. Lewis; he ultimately moved on to other things (like Spiritualism and Scientology, strangely enough), but Davidman, who was a Jewish atheist, became a Christian and traveled to England to meet Lewis. Gresham had an affair with Davidman's cousin, Renee Rodriguez, while she was away. He had also become abusive toward her and their children, and their marriage ended in divorce, after which he married Rodriguez. Davidman's subsequent marriage to Lewis was made famous by his writings, most notably by A Grief Observed, written after her death in 1960. Gresham's sons remained with Lewis.

Gresham committed suicide at a Manhattan hotel in 1962 after being diagnosed with cancer of the tongue. In his pockets they found business cards that read: No Address. No Phone. No Business. No Money. Retired.
Posted by Raphael Ordoñez at 7:29:00 AM