Noir Reviews: Gilda and The Lady from Shanghai 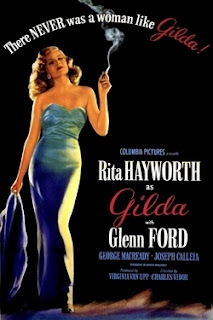 The first was released in February 1946; the second, in December 1947 (France) and June 1948 (United States). Both star the unbearably sexy Rita Hayworth with a singing voice dubbed by Anita Kert Ellis. Both take place at least partly in exotic locales. In each, a rich and powerful but impotent older man hires a virile younger man to watch over his seductive younger wife, leading to trouble of the femme fatale variety. I'm therefore going to take the liberty of reviewing them together. A little compare-and-contrast.


Mundson: It is a most faithful and obedient friend: it is silent when I want it to be silent, but talks when I want to talk.

Johnny: Is it that your idea of a friend?

Mundson: That is my idea of a friend.

Johnny: You must lead a gay life.

There's a certain...undertone...to their relationship. How intentional it is I don't know. But it's definitely there.

Before long, though, Mundson acquires a trophy wife, a nightclub performer named Gilda (Hayworth) with whom Johnny happens already to be acquainted. Hayworth's kittenish head-toss must be one of the most memorable entrances in movie history. When I first saw Gilda, I racked my brain to remember where I'd seen it before, and then it came to me: it's the shot used in The Shawshank Redemption, which is a movie a lot of people like and I hate.

Johnny and Gilda very clearly still love one another, but it's a sick kind of love that expresses itself in hate. They're obsessed with punishing and destroying each other. There are some rather improbable happenings involving tungsten mines and plane crashes. I won't bore you with the details. Suffice it to say [spoiler alert!] that the movie stabs the viewer in the back by letting the principals off with a sentimental happy ending when they clearly should have killed each other or something. Hey! Didn't someone tell me this was a film noir? 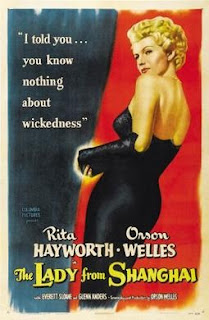 Now, if the plot of Gilda is improbable, then the plot of The Lady from Shanghai is utterly bonkers. This seems to be at least partly an editing issue. It was directed by Orson Welles, who ran into the production problems that plagued his entire career. What we have of The Lady from Shanghai is magnificent, if bizarre and nonsensical; I don't suppose we'll ever know what it might have been.

The sturdy young man, Michael O'Hara, is played by Welles himself. He's hired by a disabled defense attorney named Arthur Bannister (Everett Sloane) to serve aboard his yacht and keep his wife Elsa (Hayworth) company as they sail from New York to San Francisco by way of the Panama Canal. Bannister's weird, slightly unhinged partner Grisby comes aboard partway through the journey.

Michael finds himself increasingly entangled in the Bannisters' depraved, world-weary emotional intrigues. An atmosphere of fever, madness, and apocalyptic gloom hangs over it all. Even apart from Grisby's ravings, there's an overarching sense that things are coming apart, that the world is ceasing to cohere. Soon bombs are going to start falling; already men are feeding on men. At a grim picnic on a torrid tropical beach Michael observes:


Once, off the hump of Brazil I saw the ocean so darkened with blood it was black and the sun fainting away over the lip of the sky. We'd put in at Fortaleza, and a few of us had lines out for a bit of idle fishing. It was me had the first strike. A shark it was. Then there was another, and another shark again, till all about, the sea was made of sharks and more sharks still, and no water at all. My shark had torn himself from the hook, and the scent, or maybe the stain it was, and him bleeding his life away drove the rest of them mad. Then the beasts to to eating each other.In their frenzy, they ate at themselves. You could feel the lust of murder like a wind stinging your eyes, and you could smell the death, reeking up out of the sea. I never saw anything worse...until this little picnic tonight. And you know, there wasn't one of them sharks in the whole crazy pack that survived.

That monologue, incidentally, appears to be based on a chapter of Moby-Dick, a book that fascinated Welles throughout his career; he later explored it with a play, and himself played Father Mapple in John Huston's film.

What a beautiful, unsettling movie The Lady from Shanghai is. True, I've never been able to make head or tail of the murder plot. Who was supposed to shoot whom and why? Who was fooled and by whom and for what purpose? I'm still not certain. Maybe the film was just cut too deeply in the editing process. On the other hand, it does end in a surreal empty funhouse, which happens to be a perfect metaphor for the movie as a whole. It's crazy, so you just have to surrender yourself to it and gaze at what you see in wonder.

So, if you want a decent, reliable movie with a happy ending, watch Gilda; if you want the deeply flawed yet enigmatically beautiful work of a genius, watch The Lady from Shanghai.

Wait, what's that? You just want to look at Rita Hayworth for an hour or so? Well, my lowbrow friend, if you want to see the long red hair she's famous for, watch Gilda. If you settle for The Lady from Shanghai, be prepared to see her locks cut short and bleached blonde. Welles and Hayworth were going through a divorce at the time.

Me? I'll take The Lady from Shanghai on both counts.

I give Gilda a grade of C for commonplace and The Lady from Shanghai a grade of B for Bueno on the following scale:
High points in Gilda include Hayworth's entrance and her "Put the Blame on Mame" performance (which is dubbed over, though she sings it on her own later in the movie). High points in The Lady from Shanghai include the dreary tropical picnic, the hall of mirrors shoot-out, and every time Grisby says "tarrrrrr-get practice."

"Hate is a very exciting emotion. Haven't you noticed?"

From The Lady from Shanghai:

"It's a bright, guilty world."