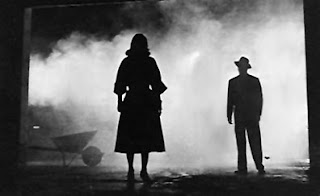 This post marks the beginning of a series about my favorite films noir from the forties and fifties. I'm an enthusiast, not an expert, but I have about a zillion titles on DVD that I watch over and over and over again. I've actually thought about making a separate blog for noir reflections, but then, knowing me, I'd just stop posting here, so I'll just dump these with the rest. Keeps me out of trouble, at any rate.

So, what is film noir? That itself is a matter of controversy. Is it a genre? A style? A period? Or some combination of the three? My approach will be to take it as a fuzzy set, defined by a few films that I regard as definitively noir, and measured by proximity to those. Some of the elements commonly regarded as central, e.g., private detectives, voice-overs, and femmes fatale, I regard as inessential, though such things do often appear in the films I intend to cover. Speaking a posteriori, I would say that films noir tend to involve detached or alienated elements of a fragmented society chained by the relentless logic of guilt and futility, using low-key lighting and visual abstraction to create an atmosphere of moral and emotional detachment. The settings are generally seedy, the scale is small, and the characters are bit players on the world stage. Films noir sometimes stray into this or that genre, such as that of science fiction (Kiss Me Deadly), the police procedural (The Big Combo), the spy film (Pickup on South Street), the western (The Treasure of the Sierra Madre), the heist film (The Asphalt Jungle), and the prison film (Brute Force). What binds them together is not subject matter but approach.

I plan to proceed in chronological order, more or less, unless my whims direct otherwise. However, I intend to skip the seminal entry, given how famous and well-known it is. Of course I'm referring to The Maltese Falcon, that is, the 1941 version directed by John Huston, which was the third (!) time Hammett's novel had been filmed. There's not much I can add to what's been said about it. But let's at least list some key elements:
It seems fair to call this a watershed moment in Hollywood. The Maltese Falcon ushered in the film noir era.

What appeals most to me about film noir is the detachment referred to above. There's never a sense that you have to like or empathize with the protagonist; you identify with him or her without becoming emotionally involved or hoping that it will come out all right in the end. The focus is objective rather than subjective. Somehow, because of this, I find films noir oddly satisfying, or even comforting; there's nothing better after a tough day at work than coming home, plopping down in a musty old armchair, and watching Double Indemnity or The Asphalt Jungle.

Strangely enough, though, despite the restrictions of the Hays code, I also find film noir much bolder and edgier than most anything you see coming out today. With rare exceptions, you won't see a movie about a thief or an adulterer nowadays that doesn't make some attempt to exculpate the protagonist in the viewer's eyes and give them some kind of happy ending. But true film noir takes the approach of portraying a culprit with all their good points and bad points rolled into one, and slowly but inexorably leading them to their doom. Visually, the film may make use of stark contrasts, but, morally speaking, there are no white hats or black hats. That makes the modern viewer queasy. Aside from the occasional farce, biopic, or gangster film, modern movies about "black hats" tend to reassure the viewer that, deep down inside, the protagonists are really white hats.

Because I have a tendency to be long-winded, I'm going to limit myself to 1000 words per review. Like I said, I'll go in chronological order, limiting myself to DVDs I own and films that I don't own but like well enough to include. If I ever get done with my list, I'll go on to neo-noirs and tech-noirs that approach the style with varying degrees of success. But it's my contention that a self-knowing noir is probably not really a noir at all.
Posted by Raphael Ordoñez at 7:24:00 AM

Email ThisBlogThis!Share to TwitterShare to FacebookShare to Pinterest
Labels: noireviews