Life beyond art has become a perfect s**tstorm of late, which has left me some time and energy for said art, but none, alas, for blogging.

Just to give a fairly innocuous example, I took the fam on a two-week camping trip in June, only to collide with a majestic leaping bull elk in a national park, totaling our beloved Ordoñezmobile and leaving us (me, my wife, our three kids) stranded, first on the side of a mountain (with all our gear, the subjects of intense scrutiny by park police), then in a campsite, for days, with no way to get more food (fortunately we'd just stocked up), no rental car being available due to a massive hailstorm having struck the region, with black bears literally snuffling around our tents at night and leaving muddy paw prints on top of our bear box in the morning, in which we had thankfully thought to enclose our three-year-old's carseat, which is undoubtedly the most smellable thing we own, after all of which we were granted, not a minivan or an SUV as we had been promised by our insurance company, but, ironically, an Impala (another leaping ungulate!) in which we were amazingly able to fit our gear and dependents (as the Egyptians fit their blocks of stone into the pyramids) although we had to bestow our faithful roofbag upon a chance-met traveler at a hotel. 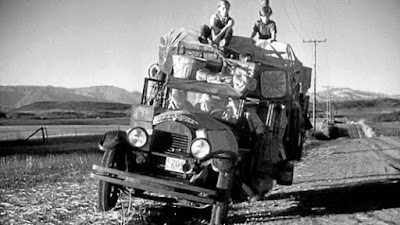 Of course we continued our trip after securing our distant rental car through a devious use of shuttle buses and a laconic and somewhat unreliable taxi driver, because we Ordoñeces aren't quitters, although we were put to the test when we discovered a subsequent campsite, which we'd reserved months before, to have been inundated by a flash flood which had deposited a smooth, foot-deep sheet of white badlands silt, out of which the picnic table rose like something from The Drowned World, which, in another dose of irony, I happened to be reading at the time; then, to take another page from The Drowned World, we arrived back at our home in south Texas, which this summer is like the point of heat focused by a magnifying lens, only to find our air conditioner broken.

And that was my vacation.

I am nevertheless happy to report that the newest installment in the Tashyas saga will grace the e-pages of Heroic Fantasy Quarterly this fall, in my story "Raft of Conquistadors," which relates the first fateful landfall of Francisco Carvajal y Lopez in what's now the Lone Star State. The action takes place on Padre Island, the bleak and strangely remote barrier island that has kept south Texas, from Corpus Christi to Brownsville, sparsely inhabited for generations. The story will be illustrated by me.

Although it may be of interest to no one but myself, these stories excite me because they let me evoke all the varied landscapes and climates that "Tashyas" has to offer; I've been making somewhat frequent trips to the Corpus Christi area since I was a little kid, when my dad would take me on collecting expeditions for his marine biology class. Right now I'm working on a Carvajal story set in central Texas, set in the vicinity of...no, I won't say it.

This summer I've also been working on the cover painting for Ark of the Hexaemeron, which is still in the process of being written, but which will, when complete, be the first heroic fantasy epic that I know of to feature three-dimensional manifold topology (sorry). I haven't done much else in the way of illustration or art-for-art's-sake lately, but I have been doing some mathematical sculptures for a little museum I've created at my college, inspired by the beautiful models and displays math departments used to curate around the year 1900, e.g., here and here.

Here, for instance, is the "dodecahedron family," printed on my 3D printer and subsequently painted: 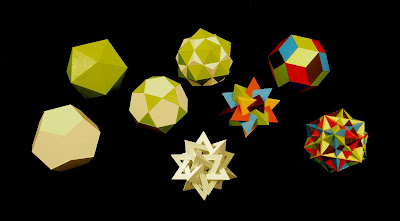 While painting these I listened to Ride the Pink Horse by Dorothy B. Hughes, an excellent noir set in a New Mexico town modeled partly on Santa Fe.

I have also been experimenting with paper-folding techniques. What especially interest me are the algebraic aspects; theoretically, origami is quite similar to the compass-and-straightedge constructions you did in high school. I've been doing origami for a long time, having been introduced to it as a kid by a Japanese friend of the family, though I don't pretend to be proficient. Just recently, though, I've discovered "kusudama" (a term that gets thrown around rather loosely) or modular origami.

Here, for instance, is the compound of five tetrahedra, assembled, without glue, from 10 sheets of square origami paper cut into thirty 1:3 rectangles, using the instructions found here. 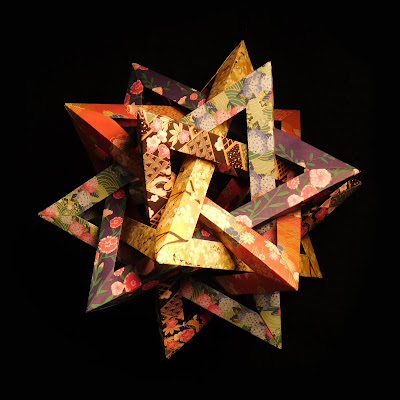 Each strut is one 1:3 rectangle; three struts fit into one another at each point. 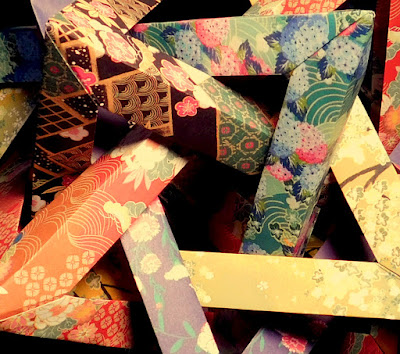 The five tetrahedra are not connected to one another in any way. The tricky part was getting them to intersect correctly while connecting the struts at the vertices. 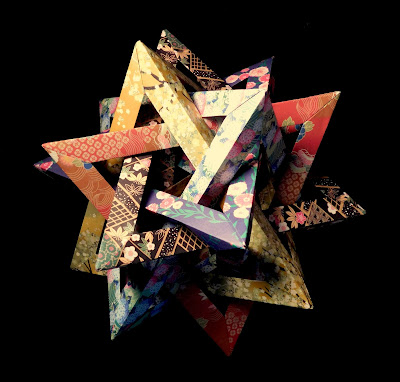 There are some books on modular origami out there; the best I've found are by Ekaterina Lukasheva, who apparently has a math background. Here's one I've made according to her instructions: 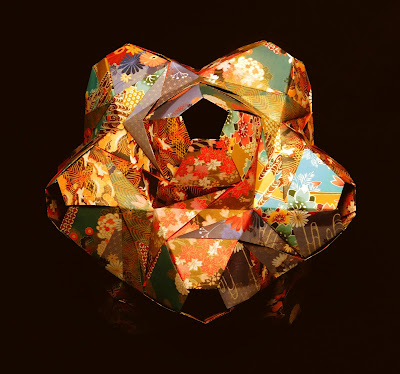 It's assembled from 15 square sheets of origami paper cut into two 1:2 rectangles apiece. The 30 rectangles are all folded in exactly the same way and attached to one another without glue. The patterns are chosen according to the compound of five cubes, with six rectangles of each pattern, and one pattern for each of the five cubes. In the end, the piece is roughly the same as a triacontahedron. 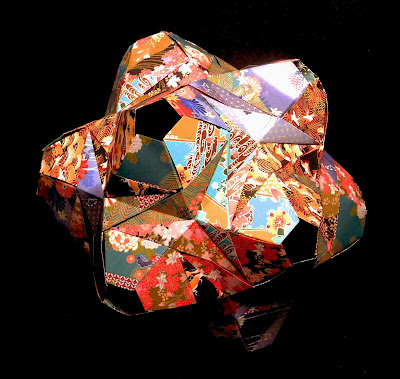 Blogging will continue to be light, but I'll probably soon post some thoughts about the things I've been reading and watching.
Posted by Raphael Ordoñez at 11:13:00 AM 2 comments: