I've never been much of a science fiction reader. My attempts at writing it have been pretty unsuccessful, too, at least to my mind. Sometimes this embarrasses me. When a "real-life" acquaintance finds out I write, and they ask, "Oh! What sorts of things?" I stammer a bit, and say, "Oh, you know, sci-fi fantasy stuff." But that's not quite honest, is it? It's just that, if I come right out and say, I write fantasy, people don't seem to know what I'm talking about. Maybe it's just where I live. It sounds like I'm confessing to writing, you know, fantasies, as in the "fantasy suites" down at the Ramada Inn. But sci-fi they understand, and it gets the basic idea across.

Me, I like the prose laid on thick, as in Conrad or Melville. That's probably obvious to readers of my books. But you don't find many gothic edifices or thickets of purple prose in the science fiction field. Descriptions are terse and often rather vague. Everything is done by suggestion. My eye just glides right over it. I'm not particularly intrigued by fictional advances in science or technology, either. Maybe I spent too many years studying spin geometry and quantum field theory.

Leaving aside romancers of the cosmic future like Herbert and Wolfe, whom I personally consider to write a species of fantasy rather than science fiction, what I find when I look at the authors I most enjoy (A. E. van Vogt, Alfred Bester, Philip K. Dick) is a preoccupation with philosophy, religion, and psychology. 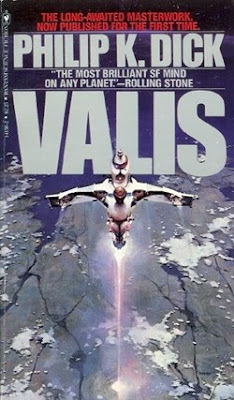 What brings on this little soliloquy is the fact that I've just read (or listened to, at any rate) Philip K. Dick's VALIS yet another time. I find myself reading Dick whenever I go through a particularly severe bout of depression and isolation. His books tend to be about people who are depressed and isolated, of course, but I find them strangely consoling for that very reason. He's a humane writer with a sympathy that never becomes sentimental.

Though possibly his most idiosyncratic work, VALIS is one that I've returned to again and again. It's Dick's hilarious yet deeply sad semi-autobiographical account of one seriously fucked-up (as Dick would put it) person's (or is it persons'?) slightly brain-fried search for God (or whatever) in paranoid post-Nixon 1970s California. Unlike a lot of Dick's fiction, drugs play only a peripheral role. Religious experience has taken their place. I remember my mother once telling me that, to her, it seemed like the Jesus People of the seventies had merely traded one drug for another (that is, dionysian ecstasy). Maybe that sums up Dick's experience.

The milieu described in a number of Dick's drugs-and-religion books bears a disturbing resemblance to a certain phase of my own life, when I spent all my time with card-carrying prophets, traveling evangelists, drug addicts, professional bead-necklace-making drifters, hippies living in station wagons, cell group leaders, paranoid schizophrenics, Hare Krishnas, recovering vampires, and undercover missionaries. I was scared out of my mind, autistic without knowing it, and, for a while, on the verge of homelessness and utter ruin. But that was my world, and the only thing I could do was try to find meaning in it. My general situation was, like Horselover Fat's, fucked up. Actually, it was just after I'd divorced myself from that world that I first started reading Philip K. Dick, starting with And Now Wait for Last Year. What I'm trying to say is, Dick's whacked-out religious novels hit close to home.

You might call VALIS an exploration of lowercase-g gnosticism, that is, salvation through special knowledge (or "information," as Dick puts it). The Exegesis runs all through it, with frequent citations from the New Testament and the pre-Socratic philosophers. What's strange is that it seems to call into question the very concept of saving knowledge, reaffirming John of the Cross's path of negation. A message is only as reliable as the messenger. Sensory impressions, interior locutions, and emotional experiences can always be questioned. Maybe they come from a divine source, or maybe someone's just playing with microwave transmissions. Maybe you're speaking to an incarnation of the pleroma, or maybe it's just a little girl rigged with wires and speakers. Looking in from the outside of Dick's universe, it seems to me that a god whose communication of himself takes place solely on the plane of "information" will always turn out to be a resident of some star system or other, that is, a being more powerful but commensurate with human beings.

It strikes me as ironic that Fat's friend David, a Catholic (and, apparently, a stand-in for Tim Powers), always tries to bring C. S. Lewis into his theodicy. Lewis was himself a gnostic, in that his descriptions of faith, in both his fiction and his apologetic works, amount to a kind of secret knowledge. The heaven described in The Last Battle is a thoroughly gnostic heaven; both Dick and Lewis routinely cite Plato. I wonder how much Lewis Dick had actually read, if any. The David character resists, but ultimately accepts the import of Fat's revelations and the significance of the Eric Lampton film. But then it all just fizzles out, gets explained away (if one can call it that) as the operation of mundane technology and delusion...

I think I'll read The Divine Invasion sometime soon. No doubt I'll have more to say then.

Some other posts on Dick-related material that you might enjoy: