My story "White Rainbow and Brown Devil" is set to appear in Heroic Fantasy Quarterly Issue #35 in February. It's a direct sequel to my first Carvajal story, "Heart of Tashyas," coming between it and "I Am Become Death, Destroyer of Worlds," and takes place in the Southwest Texas border region, which is where I live, beginning at Sycamore Creek and traveling up the Rio Grande across Devil's River and Seminole Canyon to the Pecos crossing. (The geography is somewhat telescoped.)

The story will be accompanied by an original watercolor painting of its protagonist, the vagabond conquistador Francisco Carvajal y Lopez: 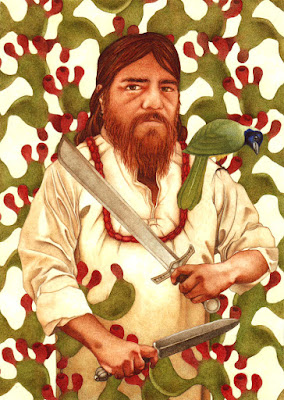 That is, essentially, a self portrait, except that I don't have long hair, I don't wear earrings, I don't encourage birds of the American subtropics to perch on my shoulder, and I don't go about armed to the teeth. Ultimately it's just a picture of the guy in my story, but to me it also asks the question To what extent do I identify with my protagonist? without really answering it. I looked to Frida Kahlo for inspiration.

Here's the slightly modified version that will accompany the story: 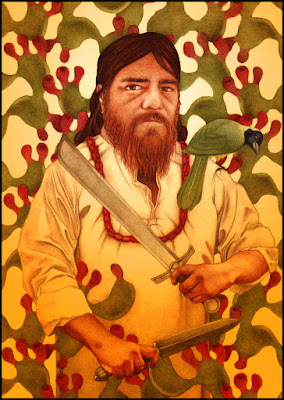 That's a green jay on his/my shoulder, incidentally. In the United States, green jays are found only in South Texas. The sewage treatment plant outside the town I live in is pretty much the northern limit of their range. I sometimes go there to bird-watch, and the jays are my favorite thing to see. A magnificent, lime green bird with a dark blue head. Much of the adjoining nature reserve occupies an old landfill covered with thickets of prickly pear; Carvajal's first adventure in "Heart of Tashyas" began at the foot of the small extinct volcano just across the highway, on a site now occupied by trailer homes and the ruins of a fort. 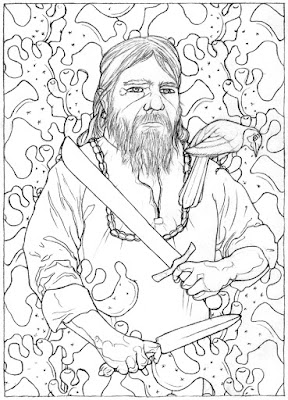 The background is a prickly pear cactus wallpaper design of my own devising: 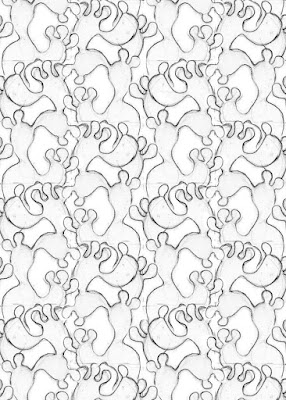 There are exactly seventeen types of wallpaper symmetry. My design is described by the group known as pg in the IUC (International Union of Crystallography) notation. I created it by drawing a single prickly pear image and copying it via translations and glide reflections.

I cast this wallpaper upon the Internet for noncommercial use, but I urge the reader to employ it in papering a room only with extreme caution.
Posted by Raphael Ordoñez at 7:08:00 AM