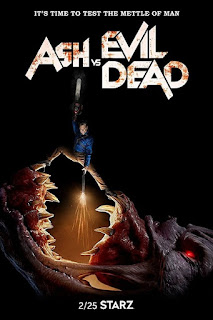 What did I do to get dropped into this sad alternate universe in which people apparently prefer interminable shambling zombie soap operas to the exploits of a chainsaw-armed, boomstick-toting deplorable from Michigan who battles Deadites all the way from the medieval past to the post-apocalyptic future?

In other words, I just finished Season 3 of Ash vs Evil Dead, which concludes with – I tell you, you wouldn't even believe it! only to find that the show has been cancelled, and that Bruce Campbell has decided to hang up his boomstick…forever.

So here I sit, all alone, while the rest of the world eagerly debates post-credits scenes and wonders what Robert Downey Jr. and Friends will do with their next billion dollars in the search for Infinity Whatsits, and possibly the most glorious slingshot ending in the history of humanity remains a tantalizing, unanswered what-if.

I mean, geez, the show was scary, gory, disgusting, offensive, hilarious – everything a decent show should be – but, on top of all of that, it was kind of inspiring in a weird way, and even – dare I say it? – touching. In that face-meltingly awesome final episode, Ash, the lovable idiot feared by hordes of evil demons, actually…grows a little bit. I don't know. Maybe, in the divine scheme of things, that meant it really was the End. And that's to say nothing of the fact that he actually gave up his own life, descended to hell, released souls from bondage, and ascended on high to sit on his own throne as the "prophesized" savior of humanity. Where do you go from epic closure in the mythos of summer? Narratively speaking, I mean.

Oh, who am I kidding? There are plenty of places to go from there, and the world is a lesser place because we don't get to see them.

Well, at least we can say this. We got fifteen hours of unadulterated awesomeness that the world simply did not deserve. Plus, the show was made by people who care about their fans, and they made sure to bring the story to an emotionally satisfying if sadly truncated conclusion. Maybe in the long run it will be better this way. Maybe I'll find my way into that alternate timeline where Evil Dead Beyond Thunderdome: Ash vs the Army of Dark Ones is a thing. For now, though, I'm just a little sad to see El Jefe ride off into the sunset, and to bid Pablo and Kelly a fond farewell. (Although, to do them justice, "Pablo" and "Kelly" are having none of it.)

I'll always remember you, Ash. Not for what you were, but for what you've become. You've completed your journey from zero to hero. You've become a king by your own hand. And you know what? If, at this point in my life, I do get back up, and continue to fight for what's right no matter what crazy s**t may happen to me, and go on living as though I have a destiny to fulfill even though 100% of the world around me thinks I'm an idiot, it will, in some part, be thanks to Ash vs Evil Dead. Crazy, isn't it?

Hail to the King, Baby.