Today I'd like to talk about a man. We all know who he is. Some think of him as a great man; none more so than himself. He is, in many ways, the man for our times. True, he's not the most intelligent person. He's not the most emotionally mature. Most of his injuries are self-inflicted. He's apt to say whatever comes into his head, and his decisions reflect an extreme lack of forethought. His words and actions are frequently reprehensible, sometimes even disgusting. He's a bit of a racist, a bit of a xenophobe, a bit of a sexist. He thinks very highly of his attractiveness to women of all ages, and feels welcome to take what he wants when he sees it. Still, time and again, he's proven his detractors wrong. He's proven that he does have it in him to be a winner.

In case you don't know yet to whom I'm referring, I'll give you one hint: he's got a chainsaw arm.

So, let me just come right out and say that I've now watched Seasons 1 and 2 of Ash vs Evil Dead, and it's one of the most glorious things I've ever seen. Maybe it's the most glorious thing I've ever seen. Would it be going too far to say that it's renewed my faith in humanity? No. No, it wouldn't. Ash vs Evil Dead has renewed my faith in humanity. I mean, seriously, this is literally the first current TV show I've watched in twenty years. Would I step forth from my fortress of media solitude if there weren't a good reason for it? 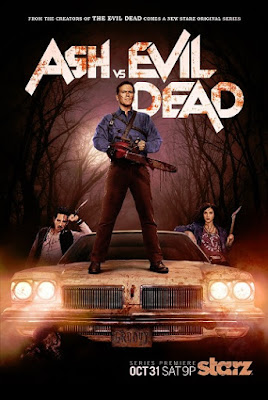 But why aren't more people talking about it? It's got everything. It's scary. It's bizarre. It's disgusting. It's hilarious. Best of all, it's a pitch-perfect blend and continuation of Evil Dead II and Army of Darkness, starring none other than the great Bruce Campbell, who never fails to chew the scenery when he isn't chopping it up. And, as though Bruce Campbell weren't enough, it's also got Lucy Lawless, a.k.a. Xena Warrior Princess, in the supporting role of Ruby, a tough, smokin' hot (I mean that literally – a Deadite pulls her into a funeral pyre) half-demon warrior lady who cruises back roads in a red sports car to a soaring Dies Irae.

I knew I had to watch Ash vs Evil Dead when this "leaked" script began circulating the web a while back.

All through that first episode, I felt this swell of half-fearful, half-hopeful joy surging up in my heart. And then the moment came when Ash accepted his destiny, slow-mo leaping into his flying chainsaw-arm to slice the head off an old lady Deadite as "Journey to the Center of the Mind" took over the soundtrack, and, suddenly, my life had meaning again. (Incidentally, the series features a variety of awesome frozen-in-amber songs, generally employed to ironic effect, by the likes of Whitesnake, Alice Cooper, AC/DC, and Quiet Riot, the perfect companion to Ash, his Delta, and his tape deck.)

I don't want to reveal too much more about the show, because I would be taking the joy of discovery away from anyone who likes the Evil Dead movies, wonders what could have been done with a bigger budget and better effects, and is still inexplicably sitting on the fence about watching. I think it's safe to say that there are three kinds of Evil Dead viewers, depending on which of the three installments you prefer (straight low-budget horror, camp horror, medieval adventure featuring chainsaw-handed, boomstick-toting imbecile hero). Me, I like them all, but I'm mainly an Army of Darkness guy. Still, I can assure you that Ash vs Evil Dead has something for everyone. Watch it! You're in for hours of visceral pleasure.

Speaking of viscera, I'm not someone who normally watches movies with high gore content – I'm sometimes disturbed by isolated acts of violence in melodramas – and I find myself wondering why the limb-hacking and gut-spilling of Ash vs Evil Dead leaves me relatively unfazed. It's isn't that it's not realistic, that's for sure. I think it has more to do with the show's general attitude. The body horror is lighthearted, the blood and guts splattered with joyous abandon, and never cynical or cruel, as, for instance, Tarantino movies tend to be.

I once sliced off the end of my finger in a meat saw. I was seventeen and cutting barbecue (because Texas) when I looked down and realized that I had gotten a little bit too close to the blade. It wasn't set on thin-slice, either. Words cannot describe the horror I felt at seeing that bright red circle where the end of my finger should have been. Did I scream or faint? No. I calmly walked over to the sink, scrubbed the wound with a soapy Brillo pad, drove my truck to the doctor's office (which was closed) and then to my house, where, holding my hand outside the door so my mother couldn't see it, I asked her to phone the hospital in the next town over and tell them that we were on our way. Cool as a cucumber. But still, the horror.

It is horrible to have a body. We're all just big pieces of meat walking around, animated (though where resides this anima, if it exists at all?) for a short time until catastrophic violence or the slow process of degeneration causes our life systems to cease functioning, and we decay and become food for the worm.


O wretched man that I am! who shall deliver me from the body of this death?

If you can't tell, this has troubled me all my life; it once almost led me to suicide. But, over the years, I've come to realize that sometimes the best way to fight horror is with humor. Our carnal existence is a little bit ridiculous, isn't it? So mock it, as Saint Francis of Assisi did when he referred to his body as Brother Ass. I think it's safe to say that a show that depicts an asshole protagonist fighting a reanimated anal sphincter engages in such mockery. There's something cathartic about watching the limbs fly and guts spill in Ash vs Evil Dead. It takes the things that most horrify me and jokes about them, which gives me a little extra courage to face life.

Speaking of assholes, if you haven't noticed, a new kind of puritanism is on the rise in this country. It feels increasingly dangerous to speak your mind. You've got to say the right kinds of things in just the right way, or you'll very quickly find yourself shut out from everywhere you want to be. I'm a nobody, but even I have gotten some of that. And you know what? Maybe I do have some ugly or ridiculous things in me. But maybe everyone does. We've got to put up with one another. 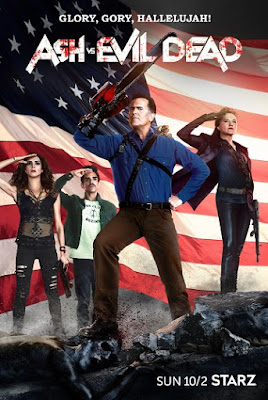 So it's kind of refreshing to watch a show about a guy like Ash Williams. He's an over-the-hill loser. He says (and does) a lot of reprehensible things. But you like him even as you laugh at him. There's no sense that you have to agree with his various comments, but there's also no sense that they have to be corrected or countered at every turn. And, uncorrected and unvarnished, he goes out and saves a little thing called the earth again and again

So listen up, all you primitive screwheads! Give Ash vs Evil Dead a chance. Just not right after dinner.
Posted by Raphael Ordoñez at 9:09:00 AM