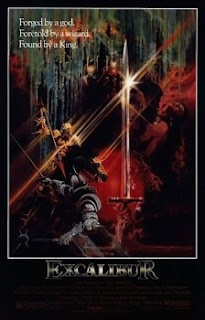 A while back I wrote about the dearth of true fantasy in film. At the time, I was searching for a Tolkienistic sense of Recovery, for mythopoeic wholeness translated into cinema, which might or might not involve what are typically thought of as fantastic elements. At least, that's what I think I was looking for. I'm still not quite sure.

What my search necessarily left by the wayside, of course, was the golden age of fantasy schlock: the 1980s. But not because I'm not fond of it! And certainly not because I'm not familiar with it. After all, it's what I grew up watching. When I went to the tiny video rental place up the street, with its tinted windows and brown shag carpet and rows of little cardboard circles hanging on hooks, I almost always walked away with a fantasy movie, usually one I'd already rented multiple times. And I never failed to watch them when they came on the local UHF station, either. 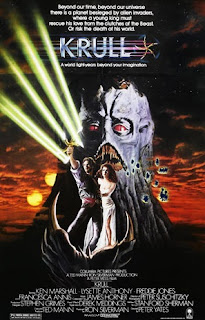 But, fond though I am of it, eighties fantasy isn't what you'd call fine cinema. Most entries fall into the category of cult favorites, which, as far as I can tell, means that they're too hokey or peculiar to be universally popular, but remain likeable in some weird way nonetheless. To watch them now, you have to be willing to take them as they are, stiff acting, laughable dialogue, synthesizer score, and all. For a while I found them unwatchable, but, now that the patina of age is settling in, they seem more like primitive insects preserved in amber. They've acquired the distinctive beauty that only the passage of years can give. In fact, it's only in hindsight that I've come to regard eighties fantasy as a thing in and of itself. I would go so far as to claim that it forms its own time-bound genre, like the film noir of the forties and fifties, that can be harked back to but never truly replicated. 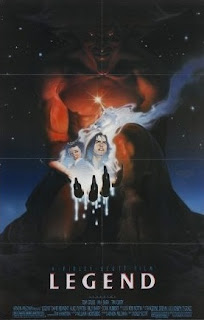 I suppose the birth of the genre (if we can call it that) was sparked by the success of Star Wars, as well as the rise of fantasy as a commercial literary genre. It's hard to draw a hard line between kids' fare and films aimed at adults; it also bleeds at its periphery into science fiction and horror. The major entries (in my book, at least) include:
and, too late to be in the eighties but still clearly belonging with the rest, 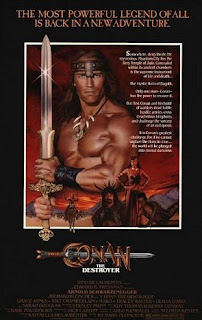 Stop-motion animation and practical effects like puppetry, models, and matte paintings reached heights of realism never before attained. It seemed like the sky would soon be the limit. And then, just like that, digital effects swept away everything else, and, with a couple exceptions, fantasy disappeared from the big screen until the rise of the turgid big-budget multi-volume epics of the naughts. It has always deeply frustrated me that George Lucas felt the need to digitize the original Star Wars trilogy. He turned the pinnacle of the eighties fantasy period into a patched-together Frankenstein monster, in which we're forced to watch a sideburned Harrison Ford chatting with a digital Jabba the Hutt, a shaggy Mark Hamill piloting a slick computerized X-wing. Like an aging actor who's gone in for extreme plastic surgery, Star Wars has merely lost what made it truly itself, visually at least. 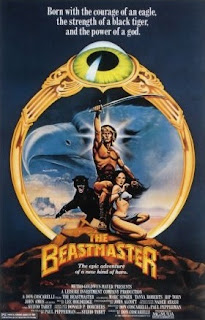 Fortunately, the other entries on my list don't face that kind of temptation. They still smell of the dim, stuffy video rental place. A few have aged very well. Most might be described as flawed gems. And a few are indisputably terrible, but irreplaceable nonetheless. Clash of the Titans (which I've seen too many times to count) is, despite being Ray Harryhausen's swan song, quite awful in the special effects department, and further marred by horrendous acting, a ludicrous plot, and unintentionally hilarious dialogue. But can it be denied that it has a canonical place in pop culture? Does anyone need to be told what "Release the Kraken!" comes from?

For me, many of these movies derive considerable charm from their trashy / awesome pop soundtracks. The most memorable is undoubtedly Flash Gordon, with music composed and performed by Queen ("Flash! Ahh-ahhhh!"), but the Neverending Story song is up there, too as are the Tangerine Dream soundtrack for Legend, and the delightful (and slightly unsettling) performance David Bowie gives as the singing, dancing goblin king in Labyrinth.

I wrote all this after watching Krull the other night with my kids. I find it emblematic of the era. It has many good points. It's stunningly beautiful. It features a rousing score by James Horner, a beautiful princess (whatever happened to beautiful movie princesses?), battles with lasers and swords, a cyclops, truly awesome stop-motion creatures, and big, weird, surrealistic sets. The plot is...okay. It's not bad. But the script. And the acting. Even Liam Neeson (in an early role) is bad. I blame it on the director.