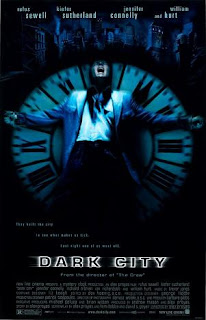 I recently saw Dark City for the first time. Apparently it came out fifteen years ago, but it just now got to the $5.00 section at the town Wal-Mart, which is how I decide which "new" movies to watch.

It was, to begin with, a visually mesmerizing film. I'm a fan of Fritz Lang, from his early German expressionist work (Die Nibelungen, Metropolis, M) to his American film noir period (Scarlet Street, The Big Heat), and his influence on Dark City is marked. Many of its images come directly from his films, e.g., the man crucified on a clock (Metropolis) and the panel of alien "judges" (M); its closed-world, claustrophobic urban sets remind me of Scarlet Street. Other images owe to 2001: A Space Odyssey, e.g., the opening shot of the hotel window, which resembles HAL's watchful-yet-uncomprehending eye. And its combination of science fiction with film noir motifs is reminiscent of Blade Runner, another favorite of mine.

The plot outline of Dark City could have come right from any number of Philip K. Dick novels. The story begins as the protagonist wakes up in a bathtub at the scene of a brutal murder. His memory has been erased. He finds himself pursued by the police as well as a cabal of mysterious, cadaver-like figures. Eventually he discovers that the city is a kind of laboratory operated by aliens known as the Strangers, beings of pure energy who clothe themselves in dead human bodies. The human subjects all go to sleep at "midnight" (there is no day) and have their memories retooled. Their names, positions in life, etc., are adjusted and traded from day to day. The purpose of the experiment is to find out what remains constant under these changes. What makes a man more than the sum of his memories and motivations? What makes him this individual as opposed to that? In short, the Strangers, who represent a kind of mind-body duality, want to isolate the human soul.

Dark City is often compared to The Matrix. They both came out at about the same time (Dark City was a little earlier) and handle similar themes. In my opinion, Dark City is much the better of the two, and should be more famous than it is.

Now, I'm already biased against The Matrix because I don't like virtual reality tales. Virtual reality or cyberspace or whatever you want to call it is basically just a big video game. Some people think games are becoming more and more realistic, and will one day be able rival real life. People who think that have a perception of reality that is grossly impaired, probably from being glued to the screen and not walking in the park enough. I don't care how fast the microprocessors get. A person raised in a virtual reality environment would be in a state next to which the position of a person raised by termites would be enviable.

At any rate, the moral of The Matrix is basically gnostic. Secret knowledge saves. Perceived reality is only a curtain hiding the truly real. The Matrix stands in the line of Plato's myth of the cave, although in it the idea is only a means to an end, the end being stylized, CGI-enhanced martial arts action.

I think Dark City represents something quite different. Its philosophical thrust is made explicit toward the end, when the protagonist encounters the last surviving Stranger. He says, in effect: You could never understand the human soul because (tapping his forehead) it isn't something in here at all. Memory is not identity, contra A. E. van Vogt and countless others. There is something about the human person that is not physical or neurological; and this thing is the very principle that in-forms us, that makes us persons in the first place.

In Dark City there is no salvation through special knowledge. Even after the protagonist learns what the Strangers have been doing to everyone, the universe is no less inexplicable. He's escaped from the "cave" only to find the silence of the void. He's still in a city flying through dark, empty space with no knowledge of where it all came from. (Is our condition much different?) On the other hand, though he uses a sledgehammer to break through a brick wall to a field of stars, we never have the sense that life is a delusion or a game. Memory may mislead, but the present is real. Love is real.

To sum up, Dark City is a film that I very much enjoyed as someone who likes classic cinema, science fiction, and philosophy. I'm the kind of movie-watcher who rarely goes to the theater but likes to find a few good films he can watch over and over and over. I suspect I've added one to my cycle.
Posted by Raphael Ordoñez at 12:25:00 AM 1 comment: