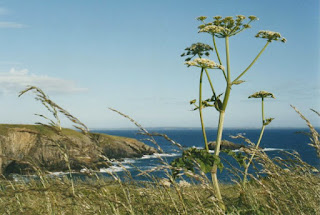 I first encountered the Matter of Britain through bowdlerized versions of the Arthurian cycle, then through Howard Pyle and, at last, Malory. Malory was where I first struck solid earth, for Pyle was separated from the land of Arthur by an ocean, and his stories take place in a generic fairyland. In Malory one breathes the air and smells the earth of the old island. From him I went on to Layamon and Monmouth, the Mabinogion and Gawain and the Green Knight, Jessie Weston and T. S. Eliot, Mary Stewart and C. S. Lewis. My long-abiding literary love of Britain eventually led me to take a five-week walking tour across the south of England and Wales, visiting Canterbury, the White Cliffs of Dover, the South Downs, Winchester, the Salisbury Plain, Dorset, the Dartmoor, the Cornish coast, Glastonbury, St. David's Head, and the Offa's Dyke path through Tintern and Hay-on-Wye, backpacking more than 150 miles in all.

When it comes to modern fantasy, most Arthurian fare leaves me cold. I mentioned Mary Stewart above; her Merlin series has a richly detailed, strongly local flavor lacking in most other fictionalizations. The quasi-mystical humbug one finds in such works is particularly irksome. Here, though, I may be betraying my bias. Nowadays people are always trying to peel away the layers that have encrusted the legends of Britain, trying to find a basis in history or ritual, trying to get to some solid substance underneath. But in most cases we have little knowledge of what the old pagan rites and beliefs were like; trying to reconstruct them or live them out is mere self-deception. When I was in Glastonbury I saw spiritual hippies ommming in fields around the famous tor and talking about force-lines running through Stonehenge and elsewhere. I wondered how the real Druids would have felt about it all.

The only chance a latter-day searcher-into-ancient-mysteries has of coming anywhere close to the heart of Britain—or of any country—is through a serious contemplation of its land, its what-it-is-in-itself. A tradition is a living force, not something one can just make from scratch. But the land is a kind of tradition, a physical memory. I speak of the land itself, not some self-regarding pantheistic conceptual framework or gratifying pseudo-mythology imposed on the land. The contemplation I'm describing requires solitude, silence, patience, and, possibly, extreme discomfort. Perhaps this is what the young Wordsworth experienced before he began writing about it, trying to distill it for pleasure and profit. "Nutting" and several passages from his Prelude come to mind. Certainly it's what Antony Abbot meant when he spoke of the "book of nature."

I've gotten away from what I meant to say. I began this post intending to write a review of Robert Holdstock's Mythago Wood, which I read recently and very much enjoyed. Suffice it to say that the land—the earth—is very much a living presence in this book. The idea of a wood larger on the inside than on the outside—a wood in which remote antiquity all the way back to the Ice Age still lives on, if one could only find the paths to the heart—this idea, this conceit, strongly appeals to me. It's a book with real substance. A lot of modern fantasy strikes me as a skin-deep, stage-scenery affair. Mythago Wood is something different, something special.
Posted by Raphael Ordoñez at 11:54:00 PM No comments: