The King of Nightspore's Crown at Black Gate

The King of Nightspore's Crown received an awesome review by Fletcher Vredenburgh over at Black Gate today. It's worth reading in its entirety, so, if you're one of the subset of persons who read my blog but do not regularly read Black Gate, I hope you'll go check it out.

He mentions the need of a glossary, which, come to think of it, I probably should have provided. Hm. I guess I'll have to post one here in the not-so-distant future, and include one in the next volume. In the meantime, have fun figuring out which words are invented and which are merely rare or obscure.

I'll also mention that I'm working on an e-book version of KoNC for Kindle. It's been my plan from the outset to offer it through that channel, but, unfortunately, various contingencies have gotten in the way. Be looking for it in the next week or so if interested.

In other news, I had an art show in town recently, and managed to sell a few pieces, including my Samuel Palmer-inspired Entombment painting. Here's the announcement: 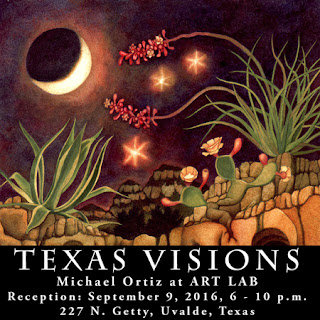 The exhibit will be up through the end of the month, if you happen to be in the area. (But, ha ha, you won't be.) The turnout was good for our town, but limited mostly to my personal contacts, plus a few of their contacts. There's just not a lot of interest in the arts here. It was the night of the homecoming game, but somehow I don't think there's much intersection between the art crowd and the football crowd.

The gallery owner, who also teaches art at the local college, was especially enthusiastic about my Nightspore painting. He noted a similarity to Brueghel and Bosch without any prompting from me, which probably pleased me more than anything. So I'm currently at work on a wrap-around painting for The Worm Ouroboros, which never got that treatment in the Ballantine series. It's taking inspiration from Persian and Indian miniatures. I may do some illustrations and a map, and try to sell it under Hythloday House like my own novels.
Posted by Raphael Ordoñez at 3:59:00 PM