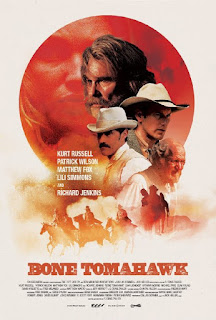 Did you know that there were two westerns starring Kurt Russell last fall? There was Quentin Tarantino's The Hateful Eight, and then there was S. Craig Zahler's Bone Tomahawk. The latter was an indie film by a first-time director. It did well at festivals but had only a limited release, meaning that there was zero chance for me to see it in the theater. But I finally watched it on the small screen the other night, and, dang, that was a good movie.

First off, I have to say that I'm not a huge fan of westerns. This is not due to lack of exposure. Quite the contrary, perhaps. I live half an hour from the Alamo Village movie set, where they filmed both the John Wayne film and Lonesome Dove. Growing up, I watched John Wayne movies until I had them memorized. When the local UHF station featured one in 3D (I forget which), we actually went out to the county courthouse – in a different town, mind you – to pick up the glasses to watch it as a family. There's some good old-fashioned red-blooded American fun for you. (It was like John Wayne's horse's nose was popping right out at us!) But, sadly, I simply can't stand westerns now. At least ones that don't involve some combination of Sergio Leone or Clint Eastwood.

However, Bone Tomahawk is better described as a horror-western, certainly an unusual combination of genres. It's like The Searchers stitched by a degenerate backwoods psychopath onto The Texas Chain Saw Massacre. So here let me also say that I'm not the target audience for brutal slasher horror films. So, why would I like Bone Tomahawk so much?

Well, I first became interested in it when I encountered this interview with the director. In it he trashes both The Hateful Eight and The Revenant, and explains that what inspired the story "comes a little bit more from the disciplines of lost race fiction, like H. Rider Haggard kind of stuff, really, than from westerns."

H. Rider Haggard kind of stuff? Sign me up!

So, the basic plot is this: A young foreman's wife (who happens to be a doctor) gets kidnapped by a tribe of degenerate cannibal troglodytes. The sheriff (Kurt Russell, who is and will always be awesome) forms a mismatched little posse to rescue her. They cross the wilderness, experiencing various Old West setbacks, and then step right into the mouth of Hell.

Really, most of film consists of these four men riding across the landscape with each other. The characters are well drawn and quite enjoyable to watch. The mood is quiet and brooding, with a rising sense of menace as they get deeper and deeper into this back corner of the wilderness. The horror is only hinted at until the last thirty minutes or so of the film. And then...hold onto your chair. Seriously, don't watch this movie if you're sensitive to graphic violence. I've never seen anything like it. What makes it hard to watch is that the characters never lose their basic humanity in the viewer's eyes. There's no emotional detachment, as you might have in a straight-up slasher. But the horror is also offset by a kind of grim but compassionate humor. And Kurt Russell is the man.

The main feature, of course, is the cannibal troglodytes. There's a lot to love here, but I don't want to say too much. They're very scary and very cool. And I love this idea of riding deeper and deeper into the American wilderness, encountering stranger and stranger things as you go, until you come to the final horror of all. In the interview mentioned above, Zahler says this:


If I could have picked anywhere to shoot this movie, probably my first choice would have been New Mexico, and certainly the thing I am least happy with in the entire movie are the exterior locations [...] I had a very specific geographical progression throughout this movie from hills and green, to flatter and green, to green and dirt, to dirt and red, to white, to rocky, to an almost primordial setting that someone compared to Journey to the Center of the Earth. It was very specific in the script how the landscape was supposed to progress, and I spent an enormous amount of time going around with different people in Los Angeles trying to find the best substitutions I could.

Too bad. I can just imagine what he could have done with a free choice of locations in New Mexico, where I've traveled, camped, and backpacked more times than I can count. But he does a very fine job with what he has at his disposal, and it's just a beautiful, beautiful movie.

So, if you want something a little different, but well worth your while if you like H. Rider Haggard kind of stuff, give Bone Tomahawk a chance. (It's currently available for free streaming if you have Amazon Prime.)
Posted by Raphael Ordoñez at 8:24:00 AM 2 comments: