"Salt and Sorcery" at BCS 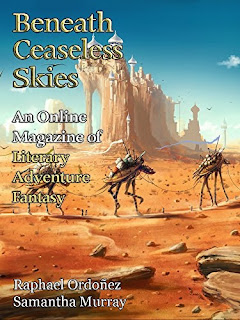 It never rains but it pours, as we say in my hometown.* Three days after the hotly-anticipated release of my novel, The King of Nightspore's Crown, my latest short story, "Salt and Sorcery," is out at Beneath Ceaseless Skies. Go check it out!

The story is inspired by a few of my favorite stories by the likes of Catherine Moore, Fritz Leiber, and Michael Moorcock; Herman Melville's meditations on whiteness; the 2015 Yuggoth Pluto flyby; and, of course, salt. But that's not all! BCS Issue #205 also features the beautifully written "A Deeper Green" by newcomer Samantha Murray, and Turtle Caravan, a weird, lovely painting by Marek Hlavaty.

One of the things that's always drawn me to sword-and-sorcery is its proximity to science fiction on one side and to weird / cosmic horror on the other. Sometimes I think it's closer to either of these than to epic fantasy, which frankly tends to bore me these days. I remember reading once in some literary essay the suggestion that sword-and-sorcery stands close to sci-fi because its worldview is fundamentally technological (sword) and scientific (sorcery). And as for cosmic horror, we can take Conan's word for it:


"A devil from the Outer Dark," he grunted. "Oh, they're nothing uncommon. They lurk as thick as fleas outside the belt of light which surrounds this world. [...] Some find their way to earth, but when they do, they have to take on earthly form and flesh of some sort. A man like myself, with a sword, is a match for any amount of fangs and talons, infernal or terrestrial." ["The Vale of Lost Women"]

There you have it. The steppes of the Hyborian world border on outer space.

My story is so titled because it takes place in a salt pan. I read a bit about such formations for the writing of it. That's how my stories often originate: I get interested in some scientific topic, like the fruiting bodies of funguses or the mating habits of horseshoe crabs, and begin romancing about it.

So go check out "Salt and Sorcery" at Beneath Ceaseless Skies! And if you like that, my friend, check thou out my novels, Dragonfly and The King of Nightspore's Crown.