I have an art show coming up in September and am working to make a few quick pieces to fill out the exhibit. I've gotten two done in one week, which must be some kind of record for me. (Lately, anyway; in my tumultuous youth I used to dash paintings off in an hour or so.)

My art shows generally attract a few of my math students, so I've been under some pains to make mathematical art, dangerous though this is, beauty and truth being distinct transcendentals, &c., &c. A while back a student sent me a YouTube video about topological doodles. Being both a doodler and a student of topology, I added one technique contained therein to my Long Meeting Repertoire. Begin with a squiggle, turn each crossing into a twist, and, Voila!, you have a surface with boundary. In the fullness of time, this led to the advent of...the Chicken Man:

Born from a drawing completed on my mother-in-law's kitchen table. Is he a chicken? A man? An indeterminate embryo? A once-punctured non-orientable surface of genus 10?

He is, at any rate, inspired by Paul Klee and the ideas expressed in his highly mathematical Pedagogical Sketchbook. I regard Klee as one of the great artistic geniuses of all time; that I might link the present discussion back to the main topic of my blog, perhaps it would be apposite to recall that time I received the following disapprobation from the famous sci-fi author and political commentator John C. Wright for my opinion:


You sound very reasonable, but then I looked up the works of Paul Klee, and they were so abominably ugly and deranged that I admit the gulf between us can never be crossed. Artistically, it is the same as trying to reason out the sound of one hand clapping: you are looking at something meant to hinder the ability to admire art, to blind the eye and benumb the brain. It is garbage, pure and simple, and even simple drawings by comic book artists or commercial artists doing magazine covers show far more skill, sanity, proportion, color, composition, and execution. [...]

Why do you vainly tell me to ignore the evidence of my eyes, which I trust, and believe the conclusions of your judgment, which even the limited experience of this exchange proves is execrable.

Had you pointed me to some painting that was merely odd or incomprehensible to me, my reaction would be different. I could continue to give you the benefit of the doubt. Instead you have pointed me to the most absurd, ghastly, and disproportion bits of ugly lunacy imaginable, pieces that make me physically sick to look at, and call them good work. [...]

I am an artist. I know what art is because I can do it. I also know when I am looking at something far better than I do because I lack the skill, and I can see the garbage you like and I know I could draw as well with my left foot after my foot was run over by a tractor and I was pumped so full of painkillers that the lower half of my brain was sloshing.

It is also obvious that no further comment is needed. Why do you think words can make me see beauty where there is nothing but filth?

I like to look that over every so often, as a message addressed to me personally by a famous person, and a perfect specimen of some art form of which the name escapes me. Good thing I'm so indefatigably ebullient, or it might have hurt my feelings. But, as my father-in-law says, opinions are like, well, you know. Everybody's got one.

My Long Meeting Doodle Repertoire is quite extensive, and consists solely of mathematical explorations. That way, when my colleagues look over and see me doodling during an important meeting, they'll just think I'm a brilliant mathematician working out some new theory. Actually, I have to draw so I can listen attentively and recall what I hear, a fact that my fifth grade math teacher didn't fully appreciate. These days my sketches consist mainly of Platonic solids and the like, as I've been developing a graduate course on regular polytopes. Here's a few sticky notes: 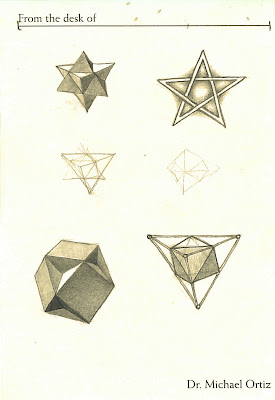 My aunt bought me these "Dr." sticky notes for graduation, incidentally; I don't buy them for myself. 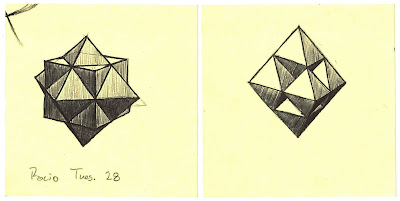 Why, you ask, am I showing you doodled-upon sticky notes from my office? Perhaps, my friend, you are looking for one of those "sensible" blogs. 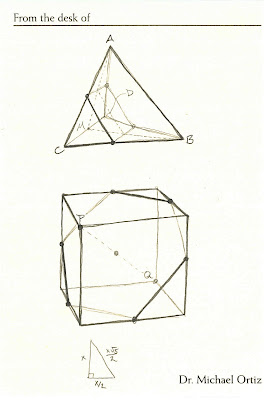 Anyway, inspired by such, I spent the first part of this week super-doodling a sketch of the rhombic triacontahedron:

The triacontahedron is a zonohedron, which, well, I won't bore you with the details. It's formed from thirty golden rhombi and is the basis of that cool lampshade you see in coffee shops sometimes. The coloration is determined by five intersecting cubes contained in the solid. The layout shamelessly mimics Leonardo da Vinci's polyhedron illustrations for Luca Pacioli's Da Divina Proportione. Pacioli is one of my mathematical ancestors – I am "descended" from him, advisor to student, down through the centuries, along with about two hundred thousand other mathematicians – so this is something of an homage to him, as well as to H. S. M. Coxeter, from whose book Regular Polytopes I first learned of zonohedra.

My multicolored sketches were the wonder of my graduate algebraic topology class, so perhaps I'll continue to produce a few more watercolors along the same lines, for old times' sake.
Posted by Raphael Ordoñez at 8:49:00 AM