When I paint, I begin with a vision of a thing to be represented, but I find, as I really get down to business, that I take the picture as a plane surface covered with pigment. My task, as a painter, is to make as beautiful a carpet of color and form as my skill permits. Forms from the natural world are admitted and retained, just as colors are, but both, and the ideas that inspired the painting in the first place, are subordinate to the unity of the final product. 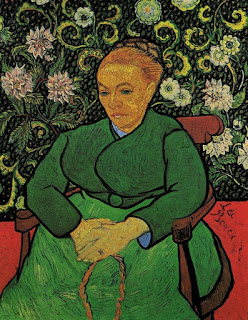 I have something of the same approach to writing stories. Whatever material elements may go into it, in the end I'm just trying to make an interesting pattern with the things I have at my disposal. Sometimes the things I have at my disposal are ugly, like Jackson Pollock's cigarette butts; sometimes they're poisonous, like the arsenic-containing emerald green used by Van Gogh. Well, you're not supposed to eat a painting, are you? Something similar might be said of a story.

I never set out to make a point in a story. That's not to say the things I think about and argue about don't find their way in there. It's just that they're like Jackson's cigarette butts. I do think the pursuit of truth important. I just don't care to do it in stories. Sometimes I even find it fun to seem to make a case for the opposite of what I believe to be the truth. That bugs people these days, because they want to know where you stand on all the important issues before they decide to like your work. I guess that's only natural, what with the Internet being overrun by pitchfork-waving mobs of one stripe or another. But it's also terribly boring.

Being an autistic Puerto Rican Greek mathematician in small-town borderland Texas, I have a skewed view of things. At least, I'm led to conclude so when I have conversations with other people. I'm like one of those strange side characters in Dostoevsky, like Ippolit in The Idiot, or Kirillov in The Possessed. My view comes out in weird and (to me) unpredictable ways.

For a few years I've thinking about how "magical multiracial" fantasy (with elves and dwarves or whatever) reflects, distorts, or falsifies race issues in the real world. I mean, that type of fiction is read mainly by white people in the anglosphere, right? At its most commercial-generic, it represents a society consisting of discrete categories of beings that coexist without mixing, which reminds me of those modern celebrations of "diversity" that often amount to a kind of segregation.

The magical multirace paradigm was set by Tolkien, although Tolkien, to be fair, got it at least partially from the Poetic Edda and such things. There are various human races in Tolkien, such as the Easterlings and the Haradrim. Aside from Sam's musings, though, they're painted in broad strokes as scarcely-human hordes. There's much talk, too, of greater men intermarrying with lesser men, to the detriment of the former. Does Tolkien, within his own universe, think it a bad thing for higher races to mix with lower races? Given what he says elsewhere about the "sin" of the elves and the role of the hobbits, I'd be inclined to say that his view was nuanced, at the very least. Still, there's a lot to be looked into there, such as the fact that Tolkien came originally from South Africa, and that The Lord of the Rings was conceived and written during the first half of the twentieth century, when a lot of ugly ideas about race were coming to a head all over the world, not just in Germany.

I've mused a bit about half-breeds in fantasy literature, and half-breeds certainly figure in Tolkien, to an extent not often approached by writers of the commercial-generic fantasy that capitalizes on his work. He has mixtures of human races, such as the men and hobbits of Bree, but also, more memorably, mixtures of human and non-human races, such as the progeny of Beren and Luthien. Philosophically, those are a little different, as Tolkien makes it clear in his letters that the elves are not a distinct biological species, differing from men only in their spiritual constitution. It's interesting that such half-breeds are allowed to choose which race they'll belong to, a choice sadly denied to human half-breeds, who must inhabit both worlds, and therefore neither. The ill-favored squint-eyed Southerner at Bree, who appears to be part human, part orc, is not treated so sympathetically, and we are not told that he got a choice like Elrond Halfelven's. Actually, the way he's described reminds me of the descriptions of mulattoes and "Asiatic" half-breeds in some of G. K. Chesterton's more offensively racist stories, and I think a case could be made that Tolkien and the writers who came after him were merely transplanting those old fears of half-breeds into less overtly racist soil.

That said, it's only by being great writers that Tolkien and Chesterton have the capacity to offend. The most your standard commercial-generic writer can aspire to is to be slightly irritating. And I do find discrete categorizations of races, magical or otherwise, to be slightly irritating. You don't just see it in fantasy. You see it whenever members of "other" races are given character traits stemming from race alone, offset, in cleverer works, by superficial differences.

In reaction to one of my Carvajal stories, a psychologist friend of mine, whose professional interests include evolutionary psychology, explained that, according to theory, it's natural (in the evolutionary sense) to have a mistrust of half-breeds, because it's unknown to whose tribe their loyalties belong. To that my reply was: perhaps it's natural or justifiable, perhaps not, but, as far as my story is concerned, I don't really care, because I'm not trying to make a point. My friend was trying to understand what I was getting at, but the truth is that I wasn't getting at anything at all. I was just making a pattern with things I've picked up here and there.

Religion makes an appearance in those Carvajal stories, too, though I'm not certain that the faith of Hispania corresponds to real-world Catholicism. Carvajal is, at any rate, an archetypal Bad Catholic, praying on the fishbone rosary mentioned somewhere by St. John of the Cross while doing his best to be a conquistador. Because I am myself Catholic, a faith it's increasingly hard to be proud of these days, I like to render the religion of the various tribes he encounters sympathetically, while I render his religion as worthy of contempt, incomprehension, or terror. The red demon-god at the end of "White Rainbow and Brown Devil" is based on the seraph that gave St. Francis of Assisi the stigmata, and the institutional church appears as a literary cigarette butt in one of my forthcoming stories. But, again, I'm not really making a point. I'm just letting things come in where they want to.

My professional and artistic and personal lives are beginning to converge in ways that I wouldn't have expected several years ago, and I feel the need to emphasize that my fiction really is art, that is, a set of patterns I've formed so as to make pleasing units, and not, say, a coded manifesto. That's not to say that my deeply-held beliefs and opinions wouldn't be offensive or incomprehensible to some of the people who might be interested in them. They're just not to be found in my stories or my rambling, contrarian blog posts.

That said, get ready for "Raft of Conquistadors," coming out in the November issue of Heroic Fantasy Quarterly!
Posted by Raphael Ordoñez at 9:15:00 AM