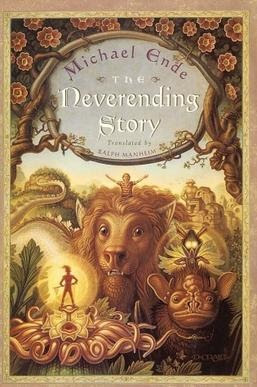 You know, one fantasy novel I never hear much talked about these days is The Neverending Story. Published originally in German as Die Unendliche Geschichtein in 1979, it became popular here in the United States in the eighties thanks to that terrible, terrible kids' movie of the same (except for a capitalized E) name. Of course I loved that movie (which is terrible) at the time, and especially that sweet theme song. But just read the book (which I did when I was a teenager) and you'll see what a hatchet job the movie is. The author, Michael Ende, would seem to have agreed with that assessment. Let's not even discuss the sequel.

I recently read the book to my kids. I'd forgotten what a mind-bending piece of meta it is. We read it as originally published, with the page-size capital letters at the beginnings of the chapters (from A for Chapter 1 to Z for Chapter 26) and the dual colors of ink (red and green) to help you navigate between metafictional modes. I'm not exactly sure what Ende was getting at with all those layers of self-reference, so here's where you get to see me puzzle that out.

If you haven't read The Neverending Story, watch out, because I'm about to spoil it all, though I don't think it's really the kind of book that gets spoiled by your knowing the plot ahead of time.

Bastian, a doughy, wimpy schoolboy with a deceased mother and an emotionally frigid father, steals a strange book from an enigmatic dealer, and holes up with it in the schoolhouse attic. In it reads the adventures of Atreyu the Greenskin, the chosen savior of Fantastica, which is being devoured by the Nothing while the Childlike Empress languishes from a mysterious illness. (Unlike in the movie, the Nothing literally looks like nothing, as though you'd gone blind.) (The clouds in the movie look pretty cool, though.) The Empress, it seems, must be given a new name by a human, but humans have stopped coming to Fantastica. We gradually learn that the purpose of Atreyu's quest and all his sufferings are solely to get Bastian, the human reader, interested in the book. At the Magic Mirror Gate, it's revealed that Bastian and Atreyu are, in some sense, the same person.

Bastian, in his reluctance to say the (slightly goofy) name he's thought up, forces the Childlike Empress to go to the Old Man of Wandering Mountain and have the story told again from the beginning, within the story itself. Here (and elsewhere) I catch just a hint of both Nietzsche (the eternal return) and – just maybe! – The Worm Ouroboros. AURYN, the talisman borne by Atreyu and the symbol of the book as a whole, consists of two snakes biting one another's tails…

Once Bastian says the name (I'll let you read the book to find out what it is), he finds himself in Fantastica. In 100% green ink now, he cuts an impetuous and increasingly disturbing swath across a succession of bizarre landscapes in an adventure that reminds me a bit of A Voyage to Arcturus. The one command laid upon him is DO WHAT YOU WISH, which seems great at first. But it turns out that each wish costs him a memory. He starts to become insufferable as he forgets what he once was.

What everyone tells him, though, is that he has to go right through Fantastica, making whatever wishes come to him and following wherever they lead. Whenever he stops wishing, he starts going in circles. He tries to make himself emperor (no one can see the Childlike Empress twice), which doesn't go too well, and almost results in his becoming the demented resident of a city of mad would-be emperors superintended by a creepy monkey. Eventually the wishes divest him of everything – his very last memories – and leave him an empty shell.

The strange thing about The Neverending Story is that, despite its having more layers than a premium nacho plate, it's enjoyable as a story in its own right. The world of Fantastica is convincingly portrayed, and Ende's powers of invention are seemingly inexhaustible. One of the main pleasures in reading the book is experiencing all the surprising and beautiful things he comes up with. The story ends with…well, with something heartwarming and sentimental. I won't knock it, but if that were the point of the novel then it wouldn't have the power it has.

To me a lot of it seems to be a parable about storytelling. Bastian is the one person in Fantastica who can tell stories. The stories he tells come true as the tells them, but there are always unintended consequences: dragons that cause suffering, clown-butterflies who vandalize. What's more, Bastian's path of wishes and growing lack of self-knowledge make him less and less capable of telling stories at all.

The Childlike Empress is portrayed as indifferent to good and evil, but her mandate, to go on wishing, while not exactly "good," is fitting, appropriate, right. It's what Bastian's got to do. Similarly, telling a story is a spiritually draining process, but the teller must go where it leads. If it's worth telling it's got a certain logic that has to be obeyed. In her indifference, I think the Empress is merely Story personified. Morality for the characters in a story is one thing; the "morality" of the storyteller (which is neither more nor less than the virtue of good craftsmanship) is another. Someone I follow online recently said something to the effect of, what kind of person takes pleasure in the misery inflected upon a character by a cruel author? I suppose it's possible to get a sadistic thrill in reading a novel, but for me it's really more the pleasure of seeing a pattern fall into place.

As I said, telling a story is a spiritually draining process. Literally, perhaps: it sucks something out of you. It's also fraught with peril. In setting yourself up as the emperor of your (invented) world, you  may find yourself doing violence to your own conceits and being relegated at last to the city of demented might-have-beens.

But maybe I'm just saying all that because I've been going in circles myself lately…
Posted by Raphael Ordoñez at 8:00:00 AM