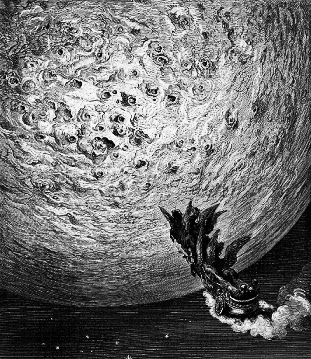 I posted recently about my chosen vein of speculative fiction, namely, planetary romance, or the sword-and-planet novel. One peculiarity of early practitioners of this high and lonely art is the variety of means they employed in getting their protagonists to the Other Side.

Among the earliest we have Jules Verne (From the Earth to the Moon and its sequel) and H. G. Wells (The First Men in the Moon), both of whom use mechanical means. Verne, who was obsessed with gadgets and "realism," has his travelers fired out of a cannon (and, truth be told, they never actually land on the moon), while Wells, who was more interested in ideas and settings, uses a rather absurd physical artifice, giving mere lip-service to theoretical constraints, much as he does in The Time-Machine. Verne, I believe, took him to task for this, but wrongly, to my mind – I find that I can forgive the author any amount of ridiculousness as to means of transport, so long as his style is sufficient to bear it along, and he attends to realism once we get there. Chandler wrote that plausibility is mostly a matter of style, and I agree with him.

And anyway, look at the historical antecedents, such as they are. Ariosto has his hero drawn by hippogriffs to the moon, and Dante is conducted by celestial spirits. Perseus – the archetypal voyager to the Other Side and slayer of fearsome alien foes – flies on winged sandals lent him by the gods, while St. Brendan executes his wonder-voyage through the North Atlantic in a flimsy leather coracle. The whole point is to get there, never mind how. 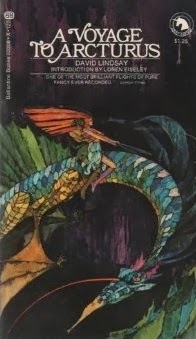 David Lindsay follows Wells rather than Verne in the absurdity of his conveyance in A Voyage to Arcturus, but the account is mysterious and quite compelling. Once again, I find it easy to suspend my disbelief in the hands of a competent storyteller. And, once we're there, we're caught up in the protagonist's physical and spiritual reactions to the alien landscape of Tormance, and Earth is all but forgotten.

Other writers didn't trouble themselves to employ even the most superficial of mechanical means. In The Worm Ouroboros, E. R. Eddison has Lessingham borne to Mercury in a hippogriff-drawn chariot conducted by a wise martlet (after which he was promptly forgotten). On the other side of the Atlantic we have Edgar Rice Burroughs, whose John Carter has only to look upon the Red Planet with a certain measure of longing to find himself there, though stark naked and seemingly in a different body. Otis Adelbert Kline, a Burroughs imitator from the thirties, uses telepathic body-exchange to get his down-and-out character to Mars. His artifice is less successful, in that we're apparently expected to forget about the fate of the Martian prince trapped in the dispossessed, jilted hero's body back on earth.

Most of the examples we've cited so far have the device of a framing story that involves the principals but is quickly forgotten, which (to me) adds a certain charm not to be found in other veins of literature. Here, then, are the keynotes of classic planetary romance: 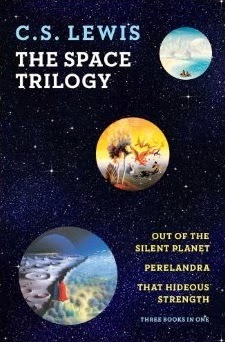 Some time after the "classic" period, C. S. Lewis wrote two planetary romances, consciously using both mechanical and spiritual means. In Out of the Silent Planet, Ransom is kidnapped by a rogue professor and his gentleman accomplice and taken to Mars in a spaceship. The ship is just as absurd as anything in Wells or Lindsay, but much more artfully introduced and described. The interplanetary voyage itself is starkly beautiful; I can't think of any other description of space that compares with it. In Perelandra Lewis doesn't bother with technology at all, and has his hero conveyed to Venus in a stone sarcophagus carried by angels. By his own account, this was inspired by a reading of A Voyage to Arcturus. Again, the point is to get there, never mind how.

Later writers were apparently uncomfortable with such flights of fancy, I suppose because the growing canon of science fiction and the advances in rocketry were daily making this scientifictional license less acceptable and less necessary. The protagonists in works like Leigh Brackett's The Sword of Rhiannon, Ursula Le Guin's Rocannon's World, and Frank Herbert's Dune get there by means that are purely mechanical and (within the genre) plausible. So, sadly, we have no more hippogriffs, astral projection, angelic sarcophagi, telepathic mind-exchanges, or backyard rocketships. They've lost something essential, though, because a keynote of the subgenre is that travel to the Other Side has to be exceptional. Otherwise we just have space opera or some other form of science fiction.

Some "planetary romances," instead of taking place elsewhere, take place elsewhen, in the very far future. Examples include H. G. Wells' The Time-Machine, William Hope Hodgson's The Night Land, A. E. van Vogt's The Book of Ptath (a.k.a. Two Hundred Million A.D.), Brian Aldiss' The Long Afternoon of Earth, and Gene Wolfe's Book of the New Sun. The keynotes are much the same. There is usually some kind of framing story and a fanciful mode of conveyance, or at least (as in Wolfe's case) some playful description of how the account was obtained.

For me personally, what really defines the subgenre is the sense of remoteness, of otherness. I like an observer I can identify with, or at least some kind of reference point with what I'm familiar with, however tenuous, but equally important is my total immersion in the other sphere. These two factors go hand in hand. A novel taking place in some other planet not linked to our own in any way would be out-and-out fantasy (like The Dark Crystal, say); a novel taking place in a planet linked to our own but not utterly severed in time or space is science fiction or alternate history.

Planetary romance: it's its own thing.
Posted by Raphael Ordoñez at 8:24:00 PM